This will most be likely be a long post as I want to take the time to explain my decisions.
first and formost there will never e enough words to thank you enough or all that so many of you have done this year and in years past for Stand Up To Cancer whether you performed, hosted an event or made a donation.  You have each made a difffernece and something I will always be so grateful for.

Unfortunately, this was the last year for Stand Up To Cancer,  If someone would like to take it into next year, please email me and I will work with you on all the contacts in the US, and the UK and Canada.


In 8 years I have made some wonderful friends and some that I hope will continue in rl.  Please know that what I am about to say does not apply to everyone.


Throughout the Stand Up to Cancer campaign I became very disillusioned with the live music community for number of reasons.  Over the past year both in Facebook and in Second Life, I have seen so much back stabbing.  When you add that to these "mega" management companies.  These companies really do not encourage a performer to talk and build a relationship with the venue owners.  One company in particular, Whispering Sands, guaranteed that the most of the time the performer really does not promote the venue. I have always believed that performers and venues both do better when the relationship is there.  When it comes to a fundraiser, they are even worse.  I did have to laugh at two performers that were removed from the auction.  The first being Lee Winegarden.  He dropped out because he had discussed it with me and wanted to do the auction, but his manager "girlfriend" actually got mad at him for it...I had not discussed it with her.  He dropped out to keep the peace.  I laughed inside thinking I know who calls the shots in that relationship.  Collin Martin was the second.  His manager is very difficult to work with.  I thought it was just me but other venue owners told me the same thing.   She took him out and I brought it up to him in the Twin Cities.  Again no mind of his own, it was his manager and he does not do anything she does not tell him.  I really had to shake my head at the community this past year.  I went through the fund raiser because I had told both the Stand Up To Cancer organization and the community that I would do this.  I had thought about reopening the venue when the fundraiser was done, though I had committed myself to never hiring anyone from Whispering Sands or a few others. But buy the time the fundraiser was done, I was so disillusioned with a community that I have loved for 8 years.  I have spent a small fortune to support this community, worked hard with the live music community to hopefully make a difference in both sl and rl. But the live music community has changed so much and in many cases became out and out mean, that I have had enough. I was just going to walk away from the community.

Leaving sl completely was not due to the live music community.  With the amount of money we brought in Stand Up To Cancer in 2015, I had to go to LL for an increase in the amount taken out of sl or I would still be taking it out very slowly.  They changed it with no questions asked, just a thank you for doing this.  This year when I went to remove it, I read it wrong and made the mistake of requesting an increase again.  That was my mistake.  When I looked again, I realized my mistake and took the money then sent it to the various locations.  Well that was not good enough for LL.  they have asked me for receipts from 2015 and 2016.  I had to go back and search through emails (no easy task as organized as I am in sl, my mailbox is a mess) which were sent to them as well as links to the the transaction pages which are public, and the pages at the various locations so they could see the donations as well.  Now one would think that was good enough.  but it has been one thing after another. Sometimes having to send them the information two and three times Copy and pasting the receipts was not good enough, they never verified the donations through the locations nor the transaction pages. Using their risk management as an excuse.  I told a relative about this and he replied that the only people I who ever have to give that information to is the IRS.  Again not an issue for me as I do not deduct the donations, it is not mine to deduct, and when requested they see it is a just q wash and not income.  I, finally after fighting them for a month, threw my hands in the air they had put an administrative hold on me and I am not fighting them anymore.  They never answered me when I asked them if they did this to every fundraiser done in sl (now that would really keep their risk management busy as most are not as transparent as I am).  Now it is in the hands of an attorney.  If my attorney actually knocks some sense into sl and they lift that hold, I will only come back to transfer inventory items to friends on things I am able to transfer.  I currently have about 90k items in inventory.  Most are no copy but are transferable.  LOL his includes just about every gown that Azul has made as well as Wild Orchid, many theme items, and tons of landscaping items.  I hate to see them go to waste.

Between the feelings I have toward the live music community as a whole (there are a few that I hold very high in regard and will be in touch with) I am no longer interested in continuing in sl.

For anyone that would like to contact me, please feel free to email me at stillbraveheart@gmail.com
Posted by Unknown at 7:35 PM 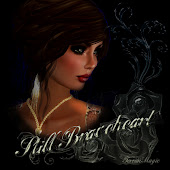